In the year 2017, the year that marks the 250th anniversary of Georg Philipp Telemann's death, “grow many beautiful blossoms”. The most beautiful one comes from the arboretum in Ellerhoop.

The head of the arboretum, Prof. Dipl. Ing. Hans-Dieter Warda, is a great lover of shrub peonies and, during his research, traced the origins of the plant to China. The shrub peony that he dedicated to Georg Philipp Telemann is a cross between a Chinese shrub-peony and a Japanese shrub-peony garden hybrid.

Professor Warda writes: "Georg Philipp Telemann is a semi-double, large-flowered shrub-peony. It grows distinctly upright and can grow to the height of a man (“Telemannsheight” declares Professor Warda). The center of the flower is formed by a wreath of decoratively protruding golden stamens. The silky, cupped petals are a bright pink-rose and bear deep magenta basal spots at the base.

It is as if in the magnificent beauty of this flower resonates the beautiful music of Telemann."

On 17 May 2017, the new variety was christened "Georg Philipp Telemann." 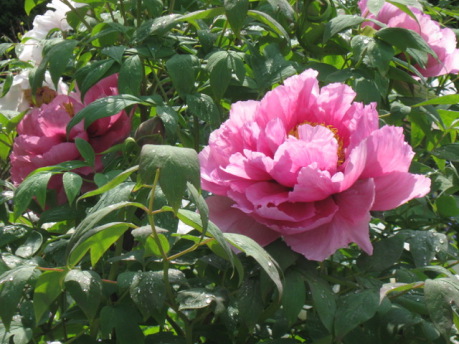